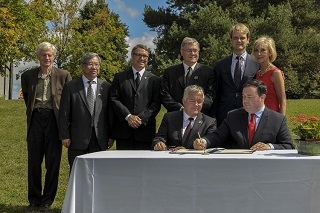 The Honourable Jason Kenney, Minister for Multiculturalism, and Canada’s Citizenship and Immigration Minister Chris Alexander, today announced federal support for a national memorial to the tens of millions of innocent victims of Communist regimes around the world.

“"Once completed, this memorial will teach future generations how millions lost their lives and suffered in inhumane conditions at the hands of Communist regimes,"” said Minister Kenney. “"It will also serve as a reminder to all Canadians that glorifying Communist symbols insults the memory of these victims, and that we must never take for granted our core values of freedom, democracy, human rights and the rule of law."”

Tribute to Liberty is receiving up to $1.5 million over two years under Citizenship and Immigration Canada’s Inter-Action program to build the memorial between the Library and Archives Canada building and the Supreme Court of Canada in Ottawa. Ministers Kenney and Alexander announced the federal funding on the site of the future memorial.

“"Canada has a proud history of serving as a place of refuge and welcoming refugees as well as displaced persons, including those escaping Communist oppression,"” said Alexander. “"Canada is today home to many different communities affected by Communism in their countries of origin, and our government is pleased to help make a Canadian memorial to victims of Communism one step closer to reality."”

Tribute to Liberty Chair Ludwik Klimkowski joined the ministers for today’s announcement, which coincided with Black Ribbon Day — a tribute to the memory of European victims of tyranny under the Communist and Nazi regimes of the last century. It marks the August 23, 1939, anniversary of the Molotov-Ribbentrop Pact, a non-aggression treaty between the Communist Soviet Union and Nazi Germany that was a precursor to the Second World War.

Tribute to Liberty will work closely with the National Capital Commission and Public Works and Government Services Canada on the development of the memorial, which will be called A Memorial to Victims of Communism. The memorial is expected to be completed in late 2014.