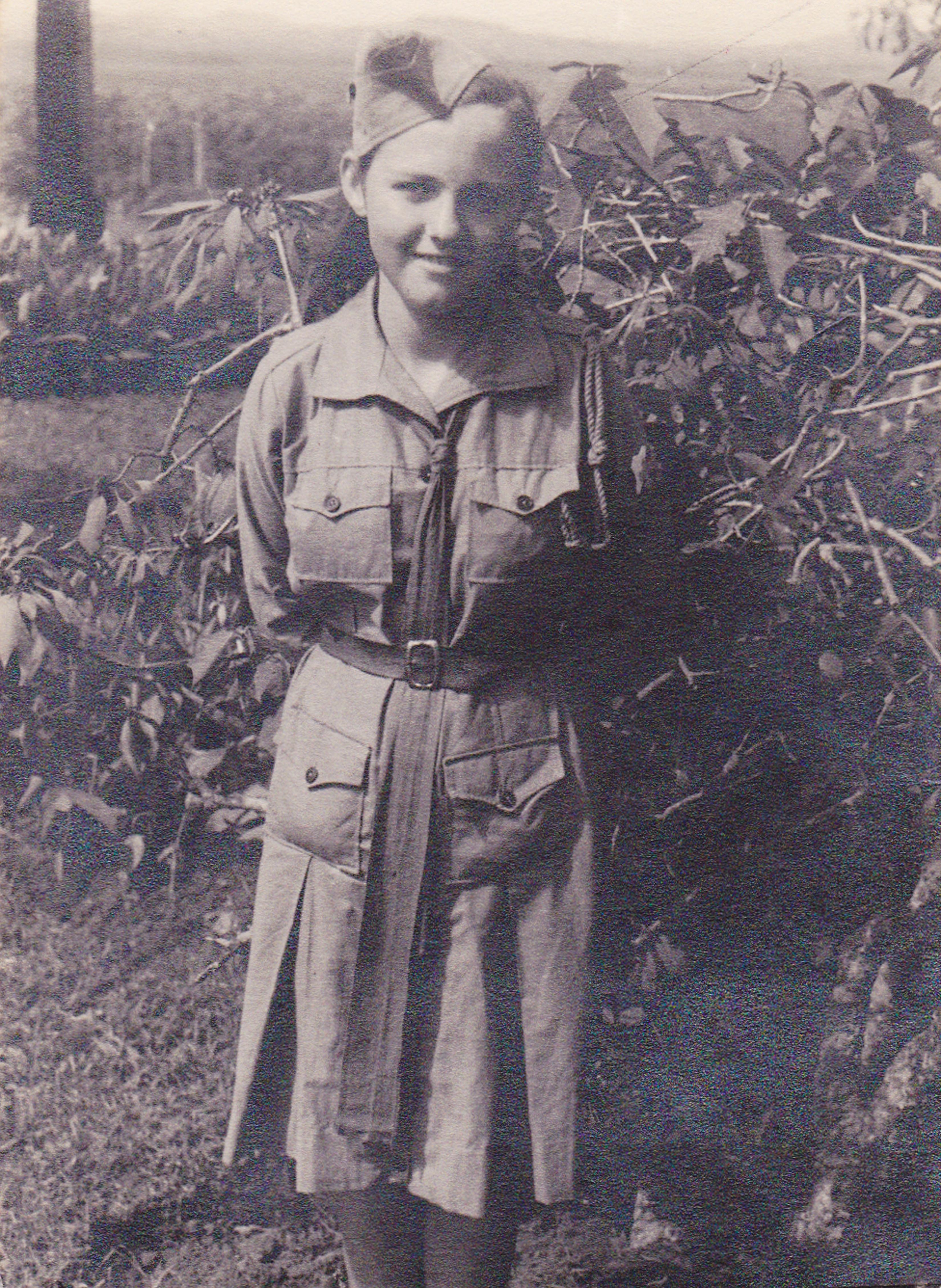 In honour of Krystyna Szkwarek

Written by Aileen Szkwarek
February 2020 marks the 80th anniversary of a largely unknown historical tragedy; Joseph Stalin’s deportation of 1.7 million Polish citizens, including 350,000 children, to slave labour camps in Siberia and the interior of the U.S.S.R.

In the first wave of this mass deportation, Aileen’s mother Christine (Krystyna Grzegorczyk) Szkwarek, and her family were arrested and exiled to Siberia.  The same fate awaited Aileen’s late father, Wladyslaw Szkwarek, and his family.

History is often written by the victors of war and in post-war communist Eastern Europe what happened to Aileen’s parents, and many others, was silenced by those with immense political power.

For Christine’s family, the terrifying events began in the middle of the night on February 10, 1940. Soviet soldiers entered the family home and at gunpoint ordered them to pack their belongings; they had fifteen minutes to do so. They were loaded onto cattle cars (standing room only) with no food, no water and nothing but a hole in the floor as a toilet. They were in shock, frightened, and did not know where they were going nor why they were arrested.

Christine’s family remained in the cattle trains for 4 weeks as they made their way to Soviet Slave labor camps in Siberia. They were plagued by hunger and begged for food and water through the cracks in the cattle cars when the trains briefly stopped in towns. Many died along the way, especially the elderly and the young. The bodies of those that died were discarded from the train as it was impossible to bury the deceased.

On March 17 Christine’s family reached the slave labour camps they were told they would never leave. In the camps, anyone old enough to work, did so. There the imprisoned Poles would cut trees in six foot deep snow.  If you didn’t work, you didn’t eat. Starvation, disease and death were common. From the unhygienic living conditions, Christine contracted Typhus and was expected to die. It was the resourcefulness of Aileen’s grandmother that kept Christine alive. Aileen’s grandmother, with the help of others, captured and killed a dog.  They placed the fat from the dog on Christine’s chest and back and then placed paper on top. The dog fat penetrated Christine’s skin and helped her survive. Many were not so lucky including Aileen’s paternal uncle who died in Siberia, at the age of 15.

When the mass deportation occurred, Stalin and Hitler were allies and their plan was to carve up and eliminate Poland.  Over time, Hitler betrayed his alliance to Stalin and invaded the Soviet Union. Stalin, in desperation, turned to Churchill and Roosevelt for assistance. Stalin, under pressure from Churchill and the Polish Government in Exile, granted “Amnesty” to the Polish prisoners in the Soviet Union.

By definition, “Amnesty” is an official pardon for people who are convicted of political offences. However, the Polish people arrested, deported and forced into slave labour had not committed any political crimes, least of all the children like Christine. The main reason for Stalin agreeing to release the Polish people was his need for more soldiers. The Polish men deported to Siberia, upon release, could join the Polish army and fight against their now common enemy, Germany.

The released Polish prisoners strengthened by the hope of freedom, set out on another arduous trek; this time out of the Soviet Union. Christine’s family left Siberia the same way they entered – in cattle cars. Poles would huddle together for warmth on the trains but, in the morning when they awoke they would often find the dead who never made it through the night. It is estimated that only 500,000 of the 1.7 million deportees survived and made it out. Christine’s family barely survived two died from typhoid and one is still un-accounted for.

Their first destination was to Kazakhstan. They then crossed the Caspian Sea in overcrowded boats into the Iranian Port of Pahlavi (now Bandar Anzali). Many starving Polish people died on the beaches after their stomachs burst from eating too much food too quickly.   The malnourished Polish refugees were then loaded on to trucks to relocate to Tehran. As they were being transported to Tehran the Iranians threw objects at them.  The frightened refugees at first thought they were being stoned, but soon noticed that the objects were not rocks, but rather dates, nuts and cookies. Amongst all the inhumanity of the deportation there were incidences like these, that showed sparks of compassion and caring. The camp in Tehran was set up by the International Red Cross with generosity from the Iranian people.   Although many Poles regained their health in Iran, it was too late for others, who were quarantined due to outbreaks of dysentery, typhus and scarlet fever. Over 2000 Poles died in Iran and are buried in a Polish Cemetery just outside of Tehran, including Aileen’s paternal grandfather and aunt.

In Iran, families were separated. Polish men, young and old, joined the Polish army while women and children were dispersed to several refugee camps in India, Pakistan, Mexico, New Zealand and East and Southern Africa. Christine’s older brother, Piotr, joined the 1st Polish Armoured Division and partook in the invasion of Normandy and the liberation of France, Belgium and Holland. While her brother was fighting on the front line, Christine, her mother and sister, were transported to a refugee camp in Uganda. Although Uganda provided a safe haven for Christine, she was one of many who contracted Malaria. Christine managed to recuperate from the infectious disease and slowly regain her health. At the refugee camp, huts were built for accommodation, and a school was established so children could attend classes and regain some sense of normalcy in order to balance the horrific experiences they endured in Siberia. In addition to schools, Our Lady Queen of Poland Catholic Church was built, which still stands today in Nyabyeya, Uganda.

While Christine resided in Uganda, it was the Yalta agreement that was to determine her fate and that of the Polish people. The Yalta agreement was formed by the heads of government of the United States (Roosevelt), the United Kingdom (Churchill), and the Soviet Union (Stalin), to establish how Europe was to be divided geographically and politically.  Pre-War Eastern Poland, where Christine’s family was from, (approximately 48% of Poland’s pre-war territory), was to be given to the Soviet Union.  Polish people considered this agreement to be a betrayal, especially the many tens of thousands of Polish troops, who had fought valiantly under British command and were then being informed that they would lose their homes to the Soviet Union.  In reaction, thirty officer’s from The 2nd Polish Corps, committed suicide.  Poland was not reinstated as a democratic country as it had been prior to the war.

With no home in Poland to return to at the end of the war, Christine, along with many other D.P’s (Displaced People) from East Africa, was transported to England where she briefly resided at Stovall Park, a school for Refugees outside of London. In 1951 Christine’s older brother Piotr immigrated to Canada, he then sponsored Christine and her mother to come. In 1953, not yet 20, with one suitcase, Christine boarded a ship out of England bound for Halifax.

Christine lived in Thunder Bay from 1953 to 2016. In 2016, she moved to Stittsville to be closer to her daughter Aileen and now resides at Stonehaven Retirement Home in Kanata.

The exile of Poles to Siberia was not spoken of and never taught in schools in Poland after WWII, as the country was under Communist rule. This tragedy was also unknown to most of the Western World. Still today, many people do not know of the atrocities inflicted upon the Polish people.  The world has come to know of the heinous crimes committed in the concentration camps of Europe during WWII.  Millions upon millions have respectfully and rightfully so born witness to these atrocities by walking the grounds of these death camps. However, very few have visited or been allowed to visit the grounds of the Slave Labour Camps in Siberia to learn about their role in WWII.  This is an essential piece of history, more so because of an ever diminishing number of survivors alive today.

In 2003, Christine and her late husband, along with other survivors of the mass deportation, were awarded The Siberian Exiles Cross Medal. This medal recognizes the suffering of Polish citizens deported to Siberia, Kazakhstan and Northern U.S.S.R., and symbolizes their unrelenting struggle for freedom and independence. This same struggle continues today as millions of refugees risk their lives to escape persecution, bigotry, incarceration and death.

Later this year the Victims of Communism Memorial will be unveiled in Ottawa.  Christine’s name will be inscribed on the Wall of Remembrance and if Christine is in good health she will be in attendance at the official Dedication of the Memorial.  Today, 8 million Canadians are descendants of someone who fled or was forced to leave a Communist regime.

It is hoped that Canada continues to be a refuge for those displaced and oppressed people of our world and that they are welcomed, like Christine, to make their home in our country without fear or prejudice.