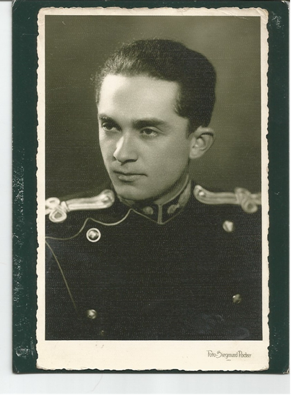 Father’s Story The Secret Police took Father during an evening of the 1950 Spring in Bucharest. At the time, Romania was under Russian occupation and the new Communist Party in power was ready to eradicate any opposition or organized resistance.

As Mother was preparing me for bed—I was 2 years old—, a big commotion started in front of our apartment’s door. Father opened the door and several men stormed in, asking Father where he is hiding the illegal publications he was distributing on the streets of Bucharest. With a calm, cold voice he replied that he does not know what they are talking about. Mother was speechless. She actually did not know anything about Father’s involvement with the resistance movement.

In response, the Secret Police proceeded to tear down the 3 bookcases, frenetically looking in the books in the hopes of finding the publications, while Father stood next to his desk and watched them. After searching all 3 rooms of the apartment, turning drawers and paintings and going through clothes without finding any trace of the papers, the leader decided to take Father with them, calling him a criminal and an enemy of the people—loud enough that all occupants of the 5 apartments in the villa would hear and understand.

Now, let’s see who was this criminal and enemy of the people:

Born in 1915 in a small town near the Carpathian Mountains, my father George Cantuniari came from a middle-class family. His father fought with heroism during the First World War and died in the famous Battle of Mărășești in 1917, leaving a 2-year-old son (Father) and a widow.

After high school, Father was admitted at the Aviation Academy to become a pilot. When Romania entered the Second World War in 1941, Father fought the enemy with courage. His bravery was honoured with 3 prestigious medals presented by the Commander of the Army and the King of Romania. After being wounded, he retired and enrolled in aerospace engineering at the Bucharest Polytechnic Institute. At the end of his studies in 1947, he became a flight instructor for young army officers. Later on, he was hired as an engineer at the National Institute for Aerospace Research.

After Father’s arrest, a military tribunal sentenced him to 25 years of prison with re-education and a fine of 15,000 lei which, in 1950, was five times the annual salary of a young engineer. The sentence was later reduced to 8 years, as the authorities were not able to find any proof of a crime other than being part of a resistance group. This group was very clear in their demands: reinstate the democratic government, return the freedom of speech and free the country from the abusive occupation of Russia.

And Father began his ordeal in some of the most terrible prisons of Communist Romania, including the infamous extermination camp of the Danube-Black Sea Canal known as the “Grave” of the finest and brightest intellectuals the country had.

Most political prisoners like Father were kept first at the Jilava prison near Bucharest. Shortly later, they were dispatched to other prisons in the country.

One day I asked Mother when will Father return and where he is now. She answered that he was in a hospital, very sick from a contagious disease. Mother always had good answers to my questions and was preparing me for the visit at the Jilava “hospital”.

When I saw Father in the prison, I was 3 years old and he was 35. Through the bars that separated us, I tried to touch his hand and told him to get well soon and come home. Father made a joke about his so-called disease and I asked him to share a cookie his mother sent him. He was happy that we could do this. After a while, a guard came to take him cutting our visit short.

A month later we learnt from a freed prisoner who had been Father’s cell roommate that he was to be moved to an undisclosed prison. The ex-prisoner also brought Mother a small cross carved by Father from a chicken bone and a very small knob engraved with these words: “Look in the desk.”

That evening Mother removed all the drawers from Father’s desk and discovered a little door behind one of the drawers. That space was full of the published materials/manifests Father could not distribute. Miraculously, the police had not found them. Otherwise, Mother would have been arrested as well, even though she knew nothing of the political activities of her husband.

That night in the bathroom, Mother burnt each of the publications, one by one . When she finished in the early hours of the morning, she left for the Hospital where she worked as a physician.

A month later our own ordeal started. The Secret Police came every night to our door shouting that we had to vacate the apartment, which was rented from the Army, as Father was an officer in the Army.

Eventually, a handwritten note was left on the door. It stated: “Leave the apartment in 24 hours or we will break the door and get you”. When Mother went to the hospital that day, worry replaced her usual smile on her beautiful face. She had been so brave since Father was imprisoned that none of her patients guessed what was happening to us until that day. But one of them, a tram driver from the Transportation Authority, asked what was going on and if he could help. Mother took the note from her purse and showed him. Without saying a word, he took the note and left.

He returned the note to her the same day. The back was now featuring another hand-written message to the Secret Police: “If anyone dares to touch Dr. Cantuniari, they will have to deal with me.” It was signed by the Manager of the Transportation Authority who probably was a high-ranking member in the Communist Party. Mother was advised to put the note behind the glass window of the door facing the stairs, so the Secret Police can see the signature. After that, the Secret Police left us alone. Silence and calm were restored in the building. We were now safe, or as safe as the wife and child of a political prisoner could be.

To keep her position and practise her profession, the Secret Police forced her to divorce Father. Most of our friends’ parents had to divorce in these circumstances as well. If you refused, the way my aunt did, you were prohibited from holding a professional job. A French teacher, she had to become a cardboard cutter in a factory.

Father agreed to the divorce. Although they were divorced, Mother waited for his return and would send him food, clothes and cigarettes when the prison would allow it. But Father was not a model prisoner. He would rebel and the guards would punish him. One of the punishments was to return the parcels he received from us.

Meanwhile, Mother was working very hard to provide me with the best care and education a child can get. A nanny was hired to take care of me while she was working 12 and 16-hour days.

Father returned after the 8 years of his sentence, with numerous health problems but not re-educated. He was unchanged. No prison and no camp could break his spirit.

After 1989, the Secret Police made archive files available. In 2006, I was able to study Father’s files and learn more.

He was under permanent surveillance from day one until his visit to USA in 1987. When he returned from prison he was able to regain the position he held before his arrest at the National Institute for Aerospace Research. It did not last long. They had the legal obligation to hire him, but let him go after 6 months. To have a former political prisoner on staff was not good PR.

After one year of looking for a job, Father was finally hired by a garage as a car washer. Nothing was available to people like him. No one wanted people like him. He washed cars for almost 2 years until he found a position in his field as a design engineer at the Bucharest Bus Factory. He retired 15 years later on medical grounds. The prisons and the camps destroyed his health but not his spirit. In fact, none of his friends or relatives who were sent to the communist gulag returned re-educated. It did not work.

As his pension was small, Father had to give English and German lessons—2 languages he was fluent in— to survive. In 1985 an American friend invited him to Atlanta, USA. The Romanian authorities would not give him a passport. After waiting for one year to get the passport issued, his friend spoke at the Free Europe radio and asked Ceausescu to let his friend come and visit him, saying that if it was denied, he was going to start an international campaign against the communist regime of Romania telling the world how international rules and engagements are broken in Romania by the very president who signed them.

A month later Father received his passport. He left on a 6-month visa to visit his friend who was very sick. Three months after his arrival in the USA, the Romanian authorities confiscated his property, a 3-room apartment inherited from his parents, making sure he would not return to the country. The regime hated patriots, which is what Father was until his last breath. He obtained his green card in 2 months, along with political asylum. All his attempts to recover his apartment were in vain. He died in 2002 in Atlanta, USA, far away from the country he deeply loved. According to his last wish, I spread most of his ashes on his parents’ grave in Romania.

Adina Cantuniari, on behalf of her courageous parents Carmen and George Cantuniari.